How over-, ageing-, and increasingly urban- populations will force us to reinvent growth

The United Nations has marked 15th November 2022 as the date the world’s population will reach 8 billion. To put this growth into perspective, a person born one hundred years ago came into a world of less than 2 billion people. Even though relative growth has slowed down somewhat since then, 200,000 people are added to the world’s population every single day. Not only is mankind growing in numbers, it is also growing in age. Japan and parts of Europe have relatively the oldest populations on the planet, but the most marked change in the coming decades is expected in China, which is expected to see the share of its 1.4 billion population aged 60-and-over increase from 18% today to 32% in 2040. The urban share of the world’s population is expected to grow from 55% today to 68% by 2050, which means that 2.2 billion extra people will need to be housed, fed, transported, and serviced. Most of this growth will take the form of new megacities in Africa and Asia, resulting in massive increases in material consumption. In South and Southeast Asia alone, by 2040 material consumption related to cities is expected to double compared to 2010.

Nature has an amazing capacity to provide for us, from recycling our water, digesting our waste, producing our food, or taking CO2 out of the air to generate the oxygen we breathe. As our species grows, however, so does our impact. And as predominance shifts from nature to man, nature’s capacity to provide its services and absorb our impact diminishes. Some lifestyles weigh heavier on the planet than others, but mankind is currently ‘over-using’ the earth. If everyone on the planet lived a typical US lifestyle, we would need over 5 planet earths. The European lifestyle on average would need almost 3 earths, Brazil’s lifestyle 1.6 and India 0.8 earths – and these numbers are growing. We extract more natural resources, return more greenhouse gas to the air, and generate more waste, than the earth’s natural cycles can compensate for. The fossil fuels that we burn each year (and the CO2 that this emits into the atmosphere) are the equivalent of 400 years of the entire planet’s plant growth being burnt. Meanwhile, relentless deforestation has turned the Amazon from a carbon sink to a net emitter of greenhouse gas, and the gap between global water supply and demand is projected to reach 40% by 2030 if current practices continue. Humanity’s impact on the planet is often represented in a simple formula: Impact = Population x Affluence x Technology. Population growth has clearly not helped reduce mankind’s impact. Affluence, the amount of consumption per person, if reflected as a measure of world GDP per capita, grew almost 7-fold (PPP) in the last 100 years. This places our hopes on technology. Tech-utopianists will argue that technology is a powerful force that has brought amazing progress in many ways, and trust that technological innovations will solve humanity’s problems. However, they tend to overlook three important factors, which have led impact to increase far more rapidly than it has been reduced through better technology: As we deteriorate natural capital, nature’s capacity to ‘compensate’ for our impact reduces further – to such an extent that our current model, too focused on economic wealth creation, is increasingly generating economic growth at the cost of natural or social capital, a phenomenon called perverse growth. In 2009, a study by Trucost determined that the cost to natural capital of our economic activity is USD 7.3 trillion, or 13% of GDP. Along the same lines, an estimated USD 120-190 billion is spent in the US each year to treat burnout and depression, which nevertheless counts towards the country’s GDP, and which begs the question if this is the type of economic growth we want.

Maybe someday, when we will be a multi-planet species, our problems and possible solutions will be multi-planet too. But for now, on our finite planet, leaders need to let go of the illusion that this multi-planet dream will solve today’s problems, as well as of the myopic belief that more people consuming more stuff will grow our GDP and thus our wellbeing. Instead of accelerating our own demise, we need to find ways to mobilise our innovations to reinvent growth to fit within the planet’s ecological boundaries, while not falling short on our social foundations. New concepts and business models like circularity, industrial symbiosis, sharing, products-as-a-service, regenerative and nature-based-solutions are already showing us that we can effectively dematerialise our consumption and boost natural capital and its services, while still growing economic capital. 2015 Research by Accenture estimated that the Circular Economy could generate as much as USD 4.5 trillion in additional economic output by 2030 by reducing waste, stimulating innovation, and creating employment. The European Union, with the Circular Economy Action Plan as a key pillar of the EU Green Deal, is leading this transition. Companies like Dutch multinational Philips have brought circularity into the core of their growth strategy and are well on their way to reaching their 2025 goal of 25% of their revenue to come from circular business. Not only environmentalists, but also investors seem to see potential in circularity, as evidenced by Blackrock’s Circular Economy investment fund growing from just 20 million seed capital in 2019 to USD 2 billion under management in 2021. Ageing societies require adjustments, not only to maintain overall productivity, but also to service this ageing demographic. This presents an enormous business opportunity, in areas such as telemedicine, health-tech, elderly nutrition and assisted living, but also in providing social connectivity. In the Asia Pacific region alone, the silver economy market is projected to be worth USD 4.6 trillion by 2025, catering to 600 million seniors above 60, according to Ageing Asia Alliance. Japan is showing how embracing robotic assistance to enhance workers’ productivity rather than replace them enables the country to better care for the growing amount of ageing citizens and keep them engaged longer. At the same time, automation provides a solution to maintaining Japan’s economic output despite an ageing or shrinking workforce. However, increasing automation has often been shown to leave workers displaced in the immediate term, while concentrating the benefits in the hands of too few. So, while welcoming automation can solve many issues related to ageing populations, it will require us to also invest in up-schooling employees and rethink distributive policies, to ensure that opportunities remain accessible to all and no-one is left behind. Despite not significantly increasing employment, Finland’s nationwide basic income experiment in 2020 resulted in important improvements in participants’ wellbeing, as well as creating positive societal feedback loops, such as increased levels of trust in society and its institutions, a crucial condition for overall productive relationships. The Finnish trial motivates further experiments with this concept in other parts of the world. In addition to seeking technological solutions, scientists and practitioners are shifting some of the attention back to more behavioural aspects of consumption. Can we help societies be happier and healthier by encouraging and providing more mental, rather than material growth? As people gain in age and wisdom, they often learn that ‘the best things in life are free’, such as connecting with one’s spirituality, with friends or with nature. Perhaps ageing populations will see these less material values and life philosophies become more pervasive. Industries like FMCG, fashion, travel, food, and retail are the domain of some of the most successful builders of brands and shapers of consumer behaviour. Without having to deny consumerism, brand builders are perfectly equipped to ‘dematerialise’ consumption without diminishing perceived value, by optimising the intangible attributes in their product development and marketing, or by nudging and shifting consumer, and eventually societal, values. Japanese culinary culture seems to carry some of this philosophy, as it has mastered the art of serving one single strawberry for desert as the minimalist climax of a special dinner. If we allow ourselves to explore and adopt some of this philosophy and learn to appreciate how “less (stuff) is more (wellbeing)”, we might just be on the right path to a more sustainable form of growth. 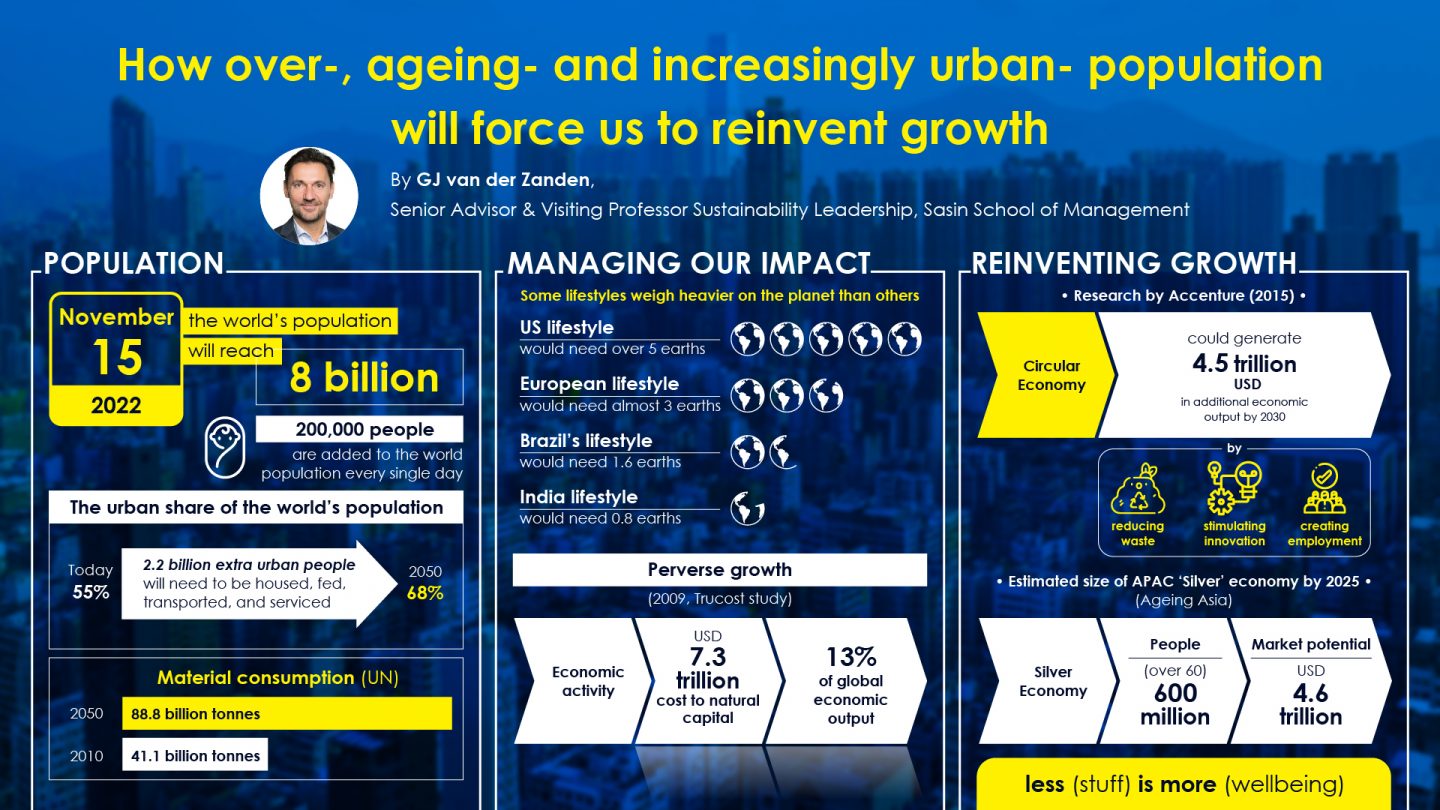