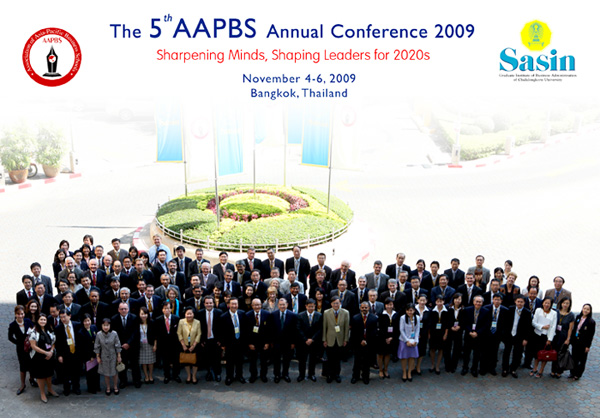 Sasin Graduate Institute of Business Administration of Chulalongkorn University is demonstrating  its position as Asia’s leader in post-graduate business education by hosting “The 5th AAPBS Annual Conference 2009.”  Participants will discuss the role of business administration institutes in developing quality business leaders to serve the  economic boom in the Asia-Pacific region.

Professor Toemsakdi Krishnamra, Director of Sasin and President of the Association of Asia-Pacific Business Schools (AAPBS) is hosting the conference between 4 – 6 November 2009 at Sasin . More than 100 honorable members from business administration institutes around Asia-Pacific will join this conference.

The main objectives of this event are to promote discussion and exchange of ideas among  international members on how to  develop teaching standards  for quality  business administration education and how to develop  quality business leaders to serve Asia Pacific’s  booming economy in  the next decade.

Sasin’s  role as  host of this conference,  reflects Sasin’s  leadership  in post-graduate business administration education.Throughout its 27 years, Sasin has been accepted as a leader in post-graduate business education.  It is  the first graduate management program in Thailand to use English as the medium of instruction and  to organize teaching by renowned professors from leading business schools such as Kellogg School of Management, Northwestern University in Chicago, USA.

“Sasin Graduate Institute of Business Administration of Chulalongkorn University” was named by His Majesty King Bhumibol Adulyadej in the occasion of his 60th birthday anniversary in December 5, 1981. Since then, Sasin has produced over 3,000 graduates who are now working as high level executives in government, non-government and private sectors.