29 Jan 2020
Fifth annual initiative recognizes 25 business school graduates creating lasting impact in the world.    Bangkok (January 28, 2020)—Sasin School of Management is proud to announce that alumna Nopparat Aumpa (EMBA 2016) is one of 25 business school graduates honored by AACSB International (AACSB)—the world’s largest business education alliance—as the 2020 Class of Influential Leaders. The annual challenge recognizes notable alumni from AACSB-accredited schools whose inspiring work serves as a model for the next generation of business leaders. Nopparat “Kai” Aumpa currently serves as Senior Assistant Vice President/General Manager of Banyan Tree Bangkok. She is the first female general manager in the luxury hotel chain, and one of the few Thai female leaders in a traditionally male, and in this region, expat, dominated industry. In addition to her position as GM of Banyan Tree’s flagship Bangkok hotel, she is also responsible for the Angsana Maison Souvannaphoum hotel in Luang Prabang, Laos, as well as serving as Banyan Tree’s main brand standard auditor. She is a facilitator in the Banyan Tree Talent Management Programme and has now taken on a role in business development to oversee the expansion of the Banyan Tree brand in Thailand. Banyan Tree is a fast-growing chain of 5-star resorts, growing from a handful of hotels in the mid-90’s to operating 47 properties as of 2019. Ms. Aumpa is one of the leaders of this rapid expansion as a key member of the opening teams of 10 properties, including the Banyan Tree Ringha in China, the Royale Hayat Hospital in Kuwait, and the Banyan Tree Mayakoba. She is actively involved in Banyan Tree’s sustainability and CSR efforts, and has helped enhance a childcare initiative for staff members of Banyan Tree Bangkok. She is also a regular speaker and facilitator at Banyan Tree’s Talent Management Academy. Her Saffron Cruise concept to bring the Banyan Tree’s iconic restaurant and roof-top bar concept to Bangkok’s Chao Phraya river with a luxury 5-star river cruise, was developed in her project management class at Sasin School of Management. “I went to Sasin because I wanted to improve my skills, but also to meet new people and get out of my comfort zone. My world was hotels and hospitality – everyone I knew was in my industry. So Sasin helped me to connect with new people from a diverse range of industries and backgrounds,” said Nopparat. “I’m passionate about nurturing people and making human connections – not just our customers, but also our associates. I want everyone here to feel like they’re part of a family.” Khun Nopparat’s rise through the ranks from her first job as a guest relations officer to become the award-winning GM of an award-winning hotel has attracted significant media attention and has been an inspiration to many, both in the hotel industry and beyond. “Nopparat Aumpa has blended her business education with passion and purpose, and AACSB is delighted to recognize her among the 2020 Class of Influential Leaders,” said Tom Robinson, AACSB president and CEO. “We’re very proud of Khun Nopparat for the work that she does and the contributions she’s made to Sasin, to the hospitality industry and to our community,” said Professor Ian Fenwick, Director of Sasin. “She continues to be an inspiration to young people, especially young women, who aspire to be influential leaders.” Now in its fifth year, the Influential Leaders challenge has recognized more than 200 business school graduates for creating lasting impact in business and society. All honorees have earned an undergraduate, graduate, or doctoral degree from one of the more than 850 AACSB-accredited business schools worldwide. For more information on the Influential Leaders challenge, and to view a full list of honorees, visit aacsb.edu/influential-leaders. 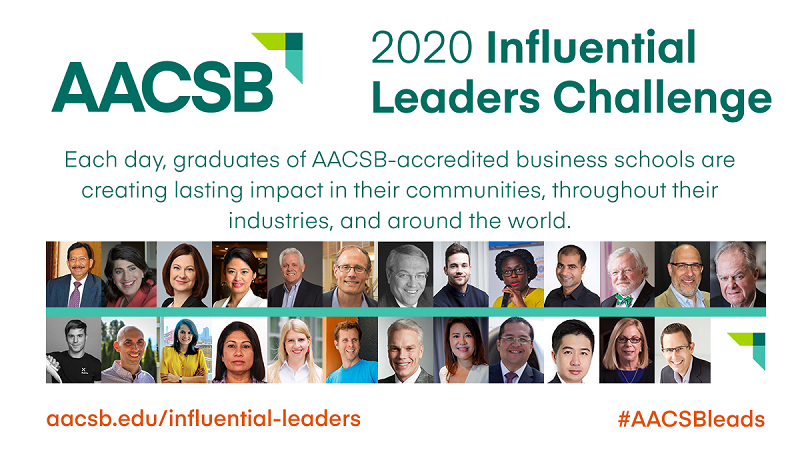